I’m back from my big Spring Training weekend.  Mom, Dad, Gran C, Pappy and I headed out on Saturday morning and caught the early flight into Phoenix, Arizona.  I slept through most of the flight, just to make sure I wouldn’t get tired during the game.

We got a rental car, made a quick stop at In-N-Out Burger (they make a tasty burger), and then headed over to Maryvale.  We had tickets for the Brewers vs. Angels.

The Brewers have a great spring training stadium. 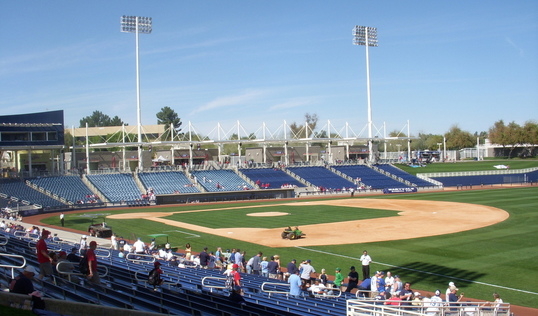 We got there early enough to watch the guys warm up and sign a few autographs. 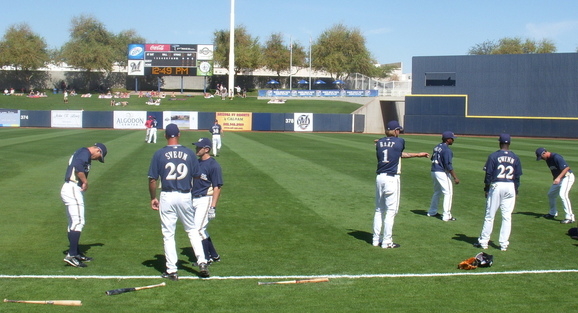 Dad got pretty sweet tickets for us.  We were on the front row, behind the Brewers dugout.  From our seats, Dad and I watched Corey Hart play catch with Ryan Braun and JJ Hardy.  Corey tossed me the ball on his way into the dugout.  That was the perfect way to start my baseball season.

Here’s Bobby Abreu at bat for the Angels.

Here’s the view from our seats.  I didn’t want to let go of the ball Corey Hart gave me.

Mom went to work on getting some good pics for my blog.  The Brewers had some heavy hitters in the lineup.  Here’s JJ Hardy. 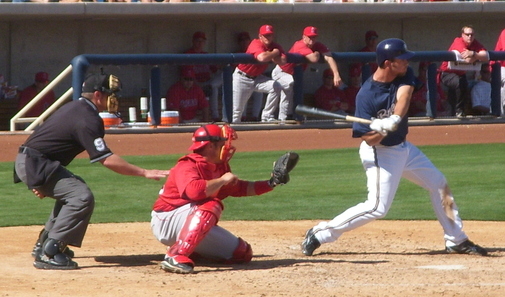 Next up was Ryan Braun. 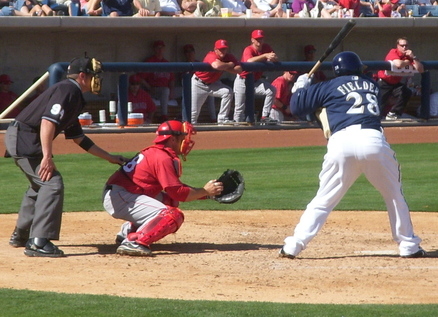 Mom got some great shots.  I’m thinking about printing some out and sending a copy off to the players to see if they’d sign it for me.  What do you think?

I also got to see my first ever Sausage Race.  This cracked me up.  Where do they go shopping for those big hats? 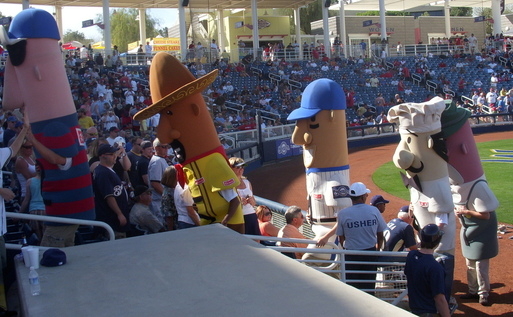 We cheered for the Brewers and they were tearing it up.  Ryan Braun went 2 for 4, while JJ Hardy and Prince Fielder both went 2 for 3.  It was a great game and the Brewers won 5-3.  I kept an eye out for Brian Fuentes, but didn’t see him.  He was great with the Rockies and I was hoping to see him thrown an inning or two with the Angels.  Oh well.  He’s supposed to be pitching for Team USA in the World Baseball Classic, so hopefully I’ll see him on TV soon.

In case you were wondering, it was hot.  I’m not sure I like the Arizona weather too much.  Somebody should turn the heat down.  After 9 innings, the boys were wiped out.

The girls were wiped out too, but Mom and Gran C were too shy for a picture. 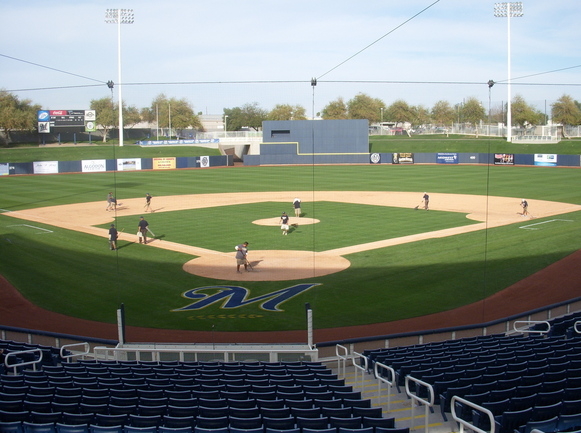 Dad hit the gift shop in search of a Brewers hat.  They had a bunch, but he didn’t get one.  I think he might be looking for an excuse to go to Milwaukee.  That’s fine by me.  Miller Park looks like a beautiful place to take in a game.

We didn’t leave empty handed.  Everyone got a Barrel Man bobblehead, plus I got a ball from Corey Hart and autographs from Manny Parra and Jonathan Lucroy. 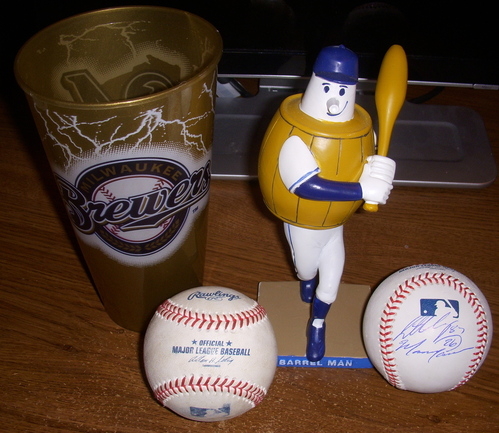 What a great time we had!  Oh, but wait, there’s more.  Unfortunately, it’s past my bed time.  I have all kinds of pics and stories from the other game we saw, but that’ll have to wait.  Stay tuned.

Chris Iannetta has accepted an invitation to play for Team USA in the upcoming World Baseball Classic.  That must be quite an honor!  Way to go Chris.  Here’s a pic of Mom helping me get my program signed by Chris last season. 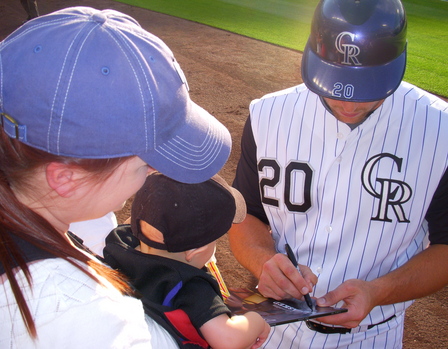 I couldn’t think of a more deserving player.  He’s a solid catcher, had a good year at the plate and treats the fans really well.

He’ll be playing alongside players like Derek Jeter, Chipper Jones and Jimmy Rollins.  Brian Fuentes, who was recently traded from my Rox to the Angels has also accepted an invitation.  Brad Hawpe got an invite, but hasn’t made a decision yet.